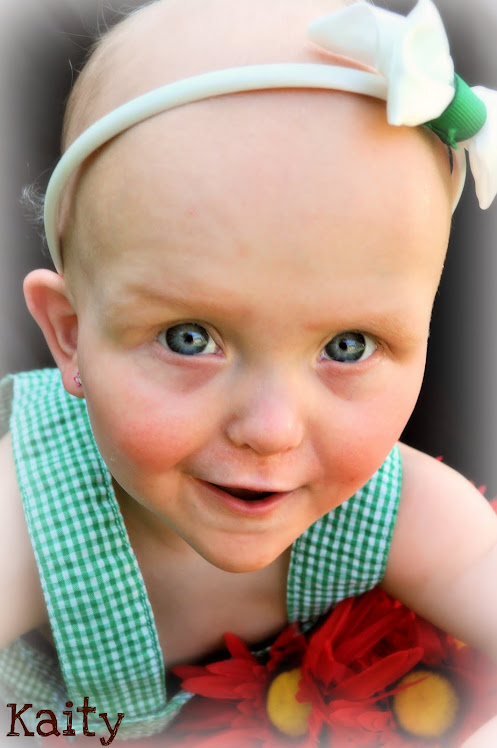 The start of our P.I.S journey

As a Mom, you always have to go with your gut instinct on things, when it comes to our precious children.
At the end of March I began to notice a small "hump" on the right side of my daughter's back.
I didn't think much of it, but continued to monitor it.  It became clear that it was getting bigger over time.
My first thought was "This must be a swollen muscle, maybe somethings out in her back?"
my husband noticed it as well and so did some of our family member's.
A lot of people that I showed her hump to, said it looked like nothing to worry about, I'm sure she's fine.
But like I said, as Mommy you have to listen to your instincts!
At about the second week of April we took her with us to our family chiropractor, my husband and I go once a month for regular adjustments.   I showed the hump to him and asked if he thought it was a swollen muscle.  He then took her and checked her spine, he had this look about him that suggested I wouldn't like what he found.  and then it came "She has Scoliosis". I was really taken back, and upset, confused and scared.  I didn't know anything about Scoliosis, except that it meant her spine was curved.
He told us that it could be managed with his care, he went on to tell us about his daughter having it.
He acted like we shouldn't go to Dr. for it, because they would only want to do xrays and that gets expensive.  Well, that wasn't want seemed right to me or my husband, so we thanked him and left.

I don't think I cried on our way home, I think I was to confused for crying at that time.
As soon as I walked into our door, I got on our computer and started the research...after hours and hours
(okay, days) on the Internet...it didn't seem like there was much hope for our daughter.
Progressive Infantile Scoliosis is supposed to rare.  When a infant or toddler has been diagnosed with P.I.S,
most if not all Oorthopedic Drs. will tell you to "Watch and Wait"  because most cases of Infantile Scoliosis is a resolving kind. Meaning it will start to corrective itself over time as if it was never there.
But not all children with Scoliosis have this resolving kind, they have progressive.  Meaning the curve will only get worse as the child grows, it will never correct itself on its own.
When a curve is over 20 degs. it is thought to be progressive. but you are still told to "watch and wait"
they will put brace on the child ( A brace will only hold the curve at its current deg. not cure it) for as long as they can until the child is old enough for spinal rod surgery.  The surgical goal for these children is to get them to about 8 or 10 years old and then insert an expandable growth rod. The major surgery only accrues once,  and then every six months they make small incisions and expand the growth rod to allow for more growth.
It has become increasingly apparent that the best method for treating progressive scoliosis in someone as young as Kaity is Early Treatment with EDF (elongation, derotation, and flexion) using the Mehta Method. That is a very complex description of what amounts to serial casting. The specific method of treatment was developed by Dr. Min Mehta. You can read more about her research and methods in this article: Growth As A Corrective Force in Early Treatment of Infantile Progressive Scoliosis. In a nutshell, the casting is done in an OR under anesthesia on a traction table. The curve is corrected slightly while the cast is applied. The cast stays on for three or four months depending on growth and then they do a comparison x-ray. When they apply the new cast, the curve is corrected a little more. This process continues until the physician feels they've reached maximum results for the particular child.


There are only 11 hospitals in the United States treating scoliosis with this method. The closest to us is Chicago Shriners for Children. I found this information on a youtube video, one night I typed in scoliosis on youtube and a video came up for Mehta E.D.F casts and I knew right away it was Kaity's only hope for a cure.  I contribute this find, solely to the Lord, who is always watching out for our Missy Kait.
This information is hard to find, I may have never found it, if were not for the Lord's guidance.
Having this information gave me instant hope for Kaity.

On May 12th. we went to see a highly recommended Pediatric Orthopedic Dr.
He xrayed Kaity's back and confirmed that she had scoliosis with a 37 deg. curve. He told us that he thought it was progressive. I asked him what the treatment plan would be and he said let "watch and wait"
if in 6 months (6 months?!)  she is worse, we will put her in a brace.  I felt like saying "well you just said it was progressive and now your saying wait 6 months?!"  I was upset.  I knew that the brace would only hold her curve NOT cure it.  and that in 6 months she would be MUCH worse.  I told him about Mehta E.D. F casts and that I wanted to do it.  He said it would be premature to do so, but the Mama instincts would not allow for that.   I joined the group CAST and got all information I needed on how to get her started with casting.
You can join CAST on yahoo groups or go to Infantile Scoliosis.org. It's a great group of families dealing with P.I.S and going through casting.   We then got her 1st Apt. at the Chicago Shiners Hospital for a consult on June 2nd.  She got another set of xrays which determined that her curve was now at a 40 degs.
The Dr. and Hospital staff were wonderful and we were so excited to have found hope for our Kaity.

She goes on August 10th for her very 1st cast and we couldn't be more anxious and excited for her treatment to begin!  I just know that the Lord lead us to this treatment and I know she will be cured!
Please check out the links and video's I posted for more information on P.I.S and Mehta E.D.F casting!

Please watch, a Father made this video of his son's Journey with P.I.S.  it is very informative about P.I.S. and the type of Cast Kaity will receive.
Posted by Kaitlyn's Journey at Thursday, July 15, 2010 No comments:

Welcome, this blog is soley about my daughter
Kaitlyn, and her Journey with Progressive Infantile Scoliosis.
My hope is to make friends and family aware of her condition and all the ups and downs that this journey will have.
Read about Kaitlyn's progress and see her cast pictures.
Helpful informative video's and link's are posted to further
educate you on P.I.S. :)

You have to ask yourself "Why my baby?"

I've thought about that over a hundred times in my head.
The result is always the same - I have no reason why.
The Lord aloud her to have this, and I might never know why.
But He always does things for a reason! His ways are not our own. All I can do is accept this (and I have) and move forward for a cure. Kaitlyn is the strongest little girl I know, she's been through alot in her 1 year and always has a smile on her face!
She is healthy, active and smart..you would never know she had P.I.S enless you saw her back. She is not special needs or different. She just has more challenges ahead of her.
But the Lord will bring her out! :) I have faith!

A picture of Kait's back 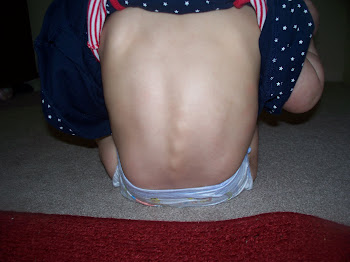 The damages of P.I.S

Xray scan of Kaity's back 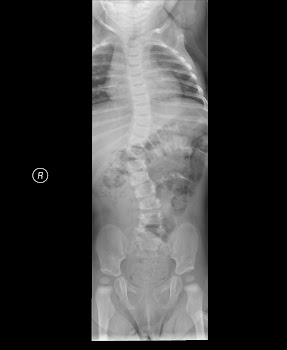